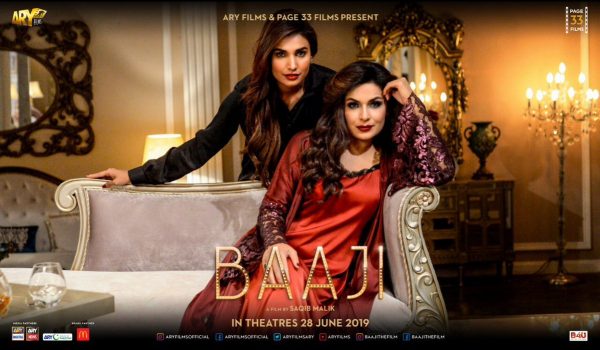 After winning critical and box office acclaim both in Pakistan and abroad, Saqib Malik directorial debut, Baaji, will now be presented in competition at The Mosaic International South Asian Film Festival in Canada. The prestigious festival, to be held in the city of Mississauga between the 1st and 4th of August, is renowned for showcasing cutting edge cinema from South Asia.

“I am thrilled that Baaji is a part of MISAFF. It’s a huge honour that the film will be in competition and up for awards,” said Saqib Malik, who is hoping to personally attend the festival and be a part of the special screening of the film on 2nd August.

Actor Ali Kazmi, who plays a prominent role in Baaji, will also be present at the festival.

Billed as Meera’s comeback film , Baaji has already created a lot of buzz for its performances and its bold infusion of genres. The film’s hit music and homage to Lollywood has also won over audiences , wherever it has played. We are hoping Baaji brings back some of those coveted international awards and makes Pakistani cinema proud!

Meanwhile back home, Baaji continues its stellar run. Nearing its sixth week in cinemas, the film continues to win new fans. According to reports, President Arif Alvi also took out time from his busy schedule and recently watched the film at the Islamabad Club cinema.

With all this acclaim coming in, we can’t wait to see what Saqib Malik has up his sleeve next.