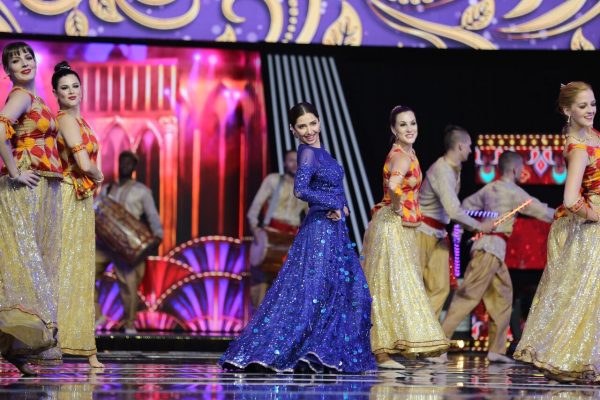 The most anticipated awards of the year, Kashmir 6th Hum Awards acclaimed to be the biggest International Pakistani Awards to be attended by top celebrities of Pakistan was held earlier today at First Ontario Centre, Hamilton, before a packed hall. It was presented by Kashmir Cooking Oil and Banaspati, brought by Golden Pearl Cosmetics, in association with Cadbury Dairy Milk, Eighteen Residential Project and Nestle Lactogrow.

Superstars, top-models and socialites were seen hobnobbing at the grand Red Carpet hosted by Ali Kazmi, Ainy Jaffri and Saheefa Jabbar who kept the stars engaged throughout. The star-studded affair not only brought the giants of the Pakistani entertainment industry under one roof but also served as a great platform to showcase the true entertainment value that Pakistan offers.

The impressive stage design set the tone of the evening from the word go. The show opened on a high, patriotic note with the stalwarts of the industry — Humayun Saeed, Mahira Khan, Shahid Afridi, Reema and Atif Aslam setting the stage ablaze with Pakistan’s national anthem.

Meekal Zulfiqar and Sanam Jung then gave a background of the awards followed by a riveting performance by Ali Rehman and Yasir Hussain to the popular song Chief Sahib.

The first awards of the evening were for Best Actor Female Soap and Best Actor Male Soap, that were presented by Yumna Zaidi and Shahzad Sheikh to Hiba Kadir for Thori Si Wafa, and Arsalan Butt for Naseebon Jali, respectively. The Best Soap award of the year was given to Naseebon Jali for its amazing story and performance and was presented by Zahid Ahmed and Angeline Malik.

The evening then kicked off with a mesmerizing performance by Hamza Ali Abbasi, Ahad Raza Mir, Hania Amir, Kubra Khan, and Shaz Khan to the music and visuals of Parwaaz Hai Junoon, a tribute to Pakistan Air Force (PAF). Ali Rehman then introduced the cast of the film and showed the trailer.

The next segment’s hosts Sanam Jung and Yasir Hussain invited Ayesha Sana and a sponsor to present the award for Best Telefilm. Malika Junaid received the award on behalf of Momal Entertainment for the telefilm Dil Daryan.

To keep everyone in stitches, the inimitable duo Bushra Ansari and Ahmed Ali Butt then engaged the audience with a comedy act.

Excellence in Cinema award was presented by the Canadian minister Ahmed D Hussain and philomena and went to Reema Khan for her contributions to Cinema.

The already charged audience was then further enthralled by a riveting performance by Mahira Khan and troupe on the songs Zalima, Urhi Urhi, Ballay Ballay and Jawai Noon.

Yasir Hussain and Ali Rehman made a re-appearance on stage. The first category of awards was for Best Original Soundtrack (OST). Out of the six tracks nominated, the award went to O Rangreza Surmai presented by Vaneeza Ahmed and Humayun Saeed. The most impactful character in a serial was also presented by Vaneeza Ahmed and Humayun Saeed and went to veterans Qavi Khan and Sania Saeed.

Bushra Ansari took the stage as host and invited Sultana Siddiqui to present the excellence in humanity award to Masarrat Misbah. A special package for Recognition award in film was viewed and the prestigious award presented by Fawad Khan went to Humayun Saeed as both producer and actor for Punjab Nahi Jaongi. Best Actor Film went to Mahira Khan presented by Fawad Khan.  Best Writer Drama Serial and Best Director Drama Serial were presented by Samina Peerzada and Adnan Siddiqui and were awarded to Qaisera for Alif Allah Aur Insaan, and to Kashif Nisar for O Rangreza and Ahsan Talish for Alif Allah Aur Insaan, respectively.

The entertainment-packed evening then featured a knockout performance by Mikaal Zulfiqar and Hareem Farooq. The next set of hosts for the evening were Ahmed Ali Butt and Sanam Jung. To recognize outstanding personalities who were voted by viewers for their remarkable work in the field of drama, viewers’ choice nominations included four awards. Beginning with Best On-Screen Couple presented by Mahira Khan and Hamza Ali Abbasi went to Ahad and Sajal for their brilliant performance and chemistry in Yaqeen ka Safar. Sponsor and Ghazal Salam were invited on stage to give out the award for Best Drama Serial to Momina Duraid for Yaqeen Ka Safar. Best Actor Female drama serial presented by sponsor and Ahad Raza Mir went to Sajal Aly for her role in Yaqeen Ka Safar and Best Actor Male, presented by sponsor and Mawra went to Ahad for Yaqeen Ka Safar.

To the delight of the audience, the mega stars of Pakistani media industry Humayun Saeed and Kubra Khan then set the stage on fire with a colourful troupe in attendance. Their electrifying performance brought the house down.

Bringing the night to a befitting end was the energizing number ‘Aasma ko chootay jaien hum’ accompanied by a scintillating performance.

It may be noted that HUM AWARDS successfully went international to another continent for the first time this year with its debut in Canada. To mark this achievement, a fun “Around Town” episode hosted by Yasir Hussain in his ‘Maqbool Khan’ avatar was introduced, featuring the character visiting multiple places and interacting with the Canadian community.