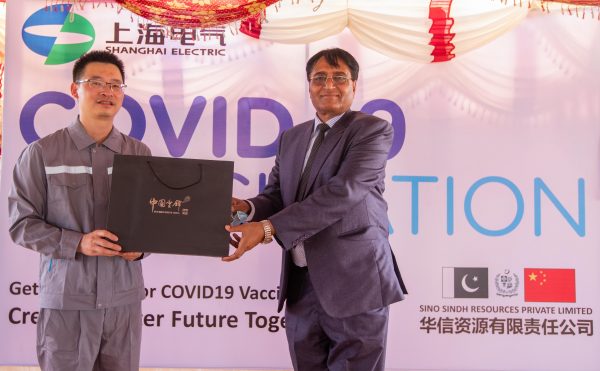 Shanghai Electric, at the helm of a mega project of the China Pakistan Economic Corridor, has started a massive drive to vaccinate thousands of its Pakistani employees in Thar Block-1.

According to a top official of Shanghai Electric, which is currently developing coal mines and a major power plant in Thar Block-1, more than 5000 employees who are associated with the CPEC projects are being vaccinated.

“The Covid-19 pandemic has affected lives and businesses all over the world and our projects in Thar are no exception. We have been making all out efforts to keep everyone safe and the current vaccination campaign is a major part of this drive,” he added.

SSRL has taken experienced doctors and paramedic staff from Karachi to vaccinate the local employees in Thar. Around 400 workers will be vaccinated daily during the ten-day drive which was inaugurated on Friday.

The vaccination campaign was inaugurated by Wang Xiaofan on Friday morning. Also present at the occasion were other senior officials of Shanghai Electric’s local subsidiary companies along with officials of the Sindh Health department.

Vaccination camps have been set up at the Shanghai Electric offices in Thar Block-1.

Since 1993, Shanghai Electric has provided electricity infrastructure services in Pakistan, and has a rich history of cooperation and friendship.

Sino Sindh Resources Private Limited (SSRL) was incorporated in Pakistan in 2011 as an overseas subsidiary controlled by Shanghai Electric (group) Corporation, specialising in coal mining. It belongs to the integrated coal and electricity project in Block 1 of Thar coalfield, which includes the construction and operation of an open-pit coal mine with an annual output of 7.8 million tons and a 2X660MW supercritical lignite power station. It is a priority project of China-Pakistan Economic Corridor (CPEC).